How to Play Champions of the Galaxy

With Champions of the Galaxy you have a chance to run your own wrestling federation of the future in the role of the main promoter and booker. Game action is fast and furious and moves in real time. The game is easy to learn and play and still packs a realistic punch! It’s Star Wars meets the WWE and you’ll love it!

The focus of Champions of the Galaxy is your imagination. There are hundreds of incredible sci-fi fighters including humans, aliens, monsters, creatures of the night, vampires, female warriors…you name it! Each character and alien race is described in detail in game handbooks.

Champions of the Galaxy is played using cards, charts, and dice. Everything you need to begin playing is featured in the Introductory Box Sets available in the online store.

The Champions of the Galaxy saga begins in the year 2087 after the ravages of a major intergalatic war. The original nitro box takes place in 2087 and features mainstays like Star Warrior, Wolf and Thantos! This is a great place to start since this is our first game edition.

You can also start with “New Beginning” which takes place in game year 2119 featuring legends like Endgame, Disaster, and Sly Drury! Or you can start in the current year with the 2125 intro box featuring our awesome new color playing cards. You can’t go wrong! You’ll have everything you need to play no matter where you start and the game handbook will explain the storylines and provides character bios. The GWF epic continues!

Champions of the Galaxy can also be played using your computer with COTGonline. Any of our Introductory Packs are the best place to start as they provide you with everything you need to play including card, dice, charts, instruction book, and handbook with game stories. These are also found at the online store.

ALL our games are played the same way, including Legends of Wrestling, Ring of Honor, Chikara, Evolve, etc. The cards are interchangeable, you can have matches between Champions of the Galaxy wrestlers and Ring of Honor wrestlers!

The key elements that make up the Champions of the Galaxy game are the character cards. On the front of the card, you’ll find an incredible drawing of the character. In the case below, it’s the controversial Bishop Hell! The back of each playing card has all the game information for having a wrestling match. It features the character’s favorite moves on offense, their abilities on defense, height, weight, home, and overall ratings. 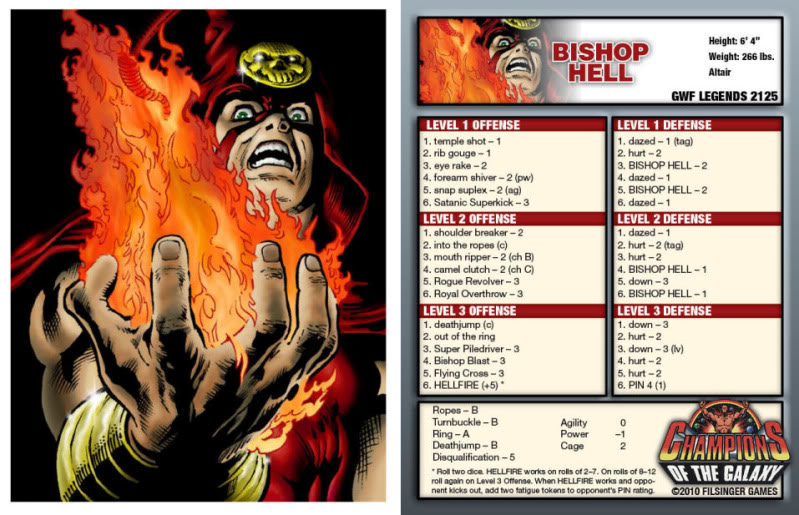 The game begins with each of two players deciding which wrestler they want to be in a match. The wrestler’s playing cards will be used throughout the match. Players will take turns rolling the dice and seeing what happens on their wrestler’s playing card. One player makes an offensive move, then the opponent makes a defensive move, and so on throughout a match. The object of the game is to win the match by pin, disqualification, or count out.

Each wrestler’s playing card contains information about their offensive and defensive skills.

The defensive side of the card (right side) shows how a wrestler reacts when he is under attack by his opponent. The instructions describe whether a wrestler is dazed, hurt, or down. When he is dazed he is not seriously hurt, but when he is down he is at his weakest.

Most instructions, both on offense and defense, are followed by a number. This number tells the opposing player where to look on his wrestler’s playing card when he takes his turn.

Each player begins by placing his wrestler’s playing card in front of him. Players then roll the dice to see who makes the first move in the match. Highest roll starts the match.

One of two things can happen to a wrestler when he is on defense. Either he is stunned by his opponent’s move or he manages to fight back. A roll on defense which results in the instructions dazed, hurt, or down means that the wrestler is in trouble and his opponent makes another offensive move. These instructions will be followed by a number. This number tells the opponent at what offensive level he should roll.

On the other hand, a roll on defense that results in the wrestler’s own name in capital letters means that the wrestler counters the move and fights back. The number following the wrestler’s name tells where he should roll on offense.

A typical match goes back and forth in this manner until a wrestler is pinned, disqualified, counted out, or both are disqualified.

Game charts are used when a player rolls one of the following instructions on offense:

When these situations occur the opponent consults the appropriate chart. See the instructions on the charts for further information. For each of the four charts, RATING A is excellent, RATING B is average, and RATING C is poor.

For tag bouts each player chooses two wrestlers prior to the start of a match. Basic rules are the same as in single matches. A wrestler can tag out to his partner at any time when he is on offense. A player may not tag out when he is on defense. His tag partner enters the ring by rolling one die on the same level of offense his partner was on.

In tag matches try not to let one wrestler dominate a match. Use reasonable judgment.

Included in this section are rules which add realism to the game. Generally these rules allow players to make choices during the course of a match. The rules range from simple to more complicated. Any of the rules may be used in any combination. Players are advised to use their own judgment in deciding which rules to use and which not to use.

For this rule, players use the PIN rating in parenthesis and ignore the PIN rating used in the basic game. To take fatigue into account players should increase their PIN rating by one after each unsuccessful cover by their opponent. Tokens should be available (like pennies) to keep a running track of a player’s PIN rating.

The number in parenthesis following a wrestler’s finisher is his finisher rating and tells how powerful his finishing move is. A rating of +5 is the most powerful while a rating of zero is least powerful.

3. Tagging Out on Defense

This rule applies when the instructions into the ropes, into the turnbuckle, out of the ring, or deathjump are followed by a (c). This means that the player has a choice to try the move or roll again. If the player decides to go ahead wih the move, then the opponent checks the proper chart and rolls to see what happens. If the player decides not to try the move, then he rolls again at the next lowest offensive level (i.e. if a player decides not to attempt out of the ring (c) on Level 3 Offense, he can reroll on Level 2 Offense).

In tag matches, the player may have a choice between trying to tag out to his partner (tag) or leaving the ring (lv). A player may try either move, but not both.

This rule applies when an instruction on offense is followed by (ch) and a letter. The original instruction should be ignored. Instead, the player looks at the Choice Situations chart under the letter that followes (ch) on the playing card. In all cases a player has a choice of two moves to try on his opponent. Whether the moves will be successful or not depends on the certain skills on the opponent. The offensive player will need to add or subtract his opponent’s agility and/or power ratings to determine the odds that these moves will be successful. See the Choice Situations chart for further information.

The Feud Table is used when a feud match (refer to the last page of the wrestler’s description booklet) ends with a roll of doubles (including pins, disqualifications, double disqualifications, and count outs). When this happens, there will be fighting after the match is over. Often this fighting will involve other wrestlers and someone will be injured. See the Feud Table for further instructions.

A wrestler may choose to have an ally accompany him to ringside in single bouts. This ally might become involved in the match. Bringing an ally to ringside increases the risk of disqualification, but can pay off in a victory as well.

Some moves on wrestler cards are followed by “Add 1.” These are powerful moves that might not involved a pin. In these situations, add one to the opponent’s Pin Rating and continue playing in the normal manner.

Some wrestlers have a “roll” finisher that requires the player to roll one or two dice, for example a finishing move followed by (roll) or (2-6) or some other variation. The roll is the finisher rating. Sometimes a roll of 1 or 6 means the wrestler misses the move (different wrestlers have different variations on the roll finisher – see individual wrestler cards for specifics).

Any move followed by (dq) means the wrestler could be disqualified for using the move. Roll the wrestler’s disqualification rating (or the number in parenthesis with the (dq) instruction, if present) to see if he is diqualified.