Family of Blood Will Invade GWF in Regime Change 2132. 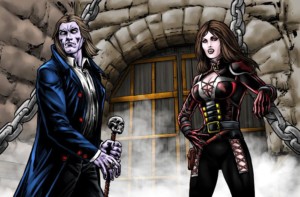 Look out HelSin and Crossfire, there’s new blood coming to the GWF!

Or perhaps it’s a mix of new and old. Returning to the GWF after a decade-long absence will be vampire legend, NECROS! He’s bringing with him a member of his own family, SINFUL. Together with Coven Black they will form a mini-team called the Family of Blood. What is their goal?

Necros and Sinful use two amazing finishers: LIFE BLOOD and RISING FROM THE GRAVE. Both finishers will shock GWF fans!

Will Coven Black and the Family of Blood be managed by the Dark Menace or are they going their separate ways? Is Necros holding a Black Death scepter? How will HelSin respond to these new developments? And what is the status of Mistress of Darkness?

All these answers and more coming in REGIME CHANGE 2132 which is slated for release in late August. It’ll be another milestone game edition in the unprecedented A Universe Shattered epic story arc! What could possibly follow the shockers in BLACK DEATH and FUTURE SHOCK? You’re about to find out!

Preorder REGIME CHANGE 2132 HERE so you can be sure to receive it AS SOON AS IT’S RELEASED!