The Dark Menace in Action With Criminal Justice! 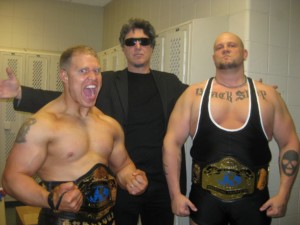 Criminal Justice is a tag team featuring Luscious Rocky Reynolds and Black Sheep Benett Cole. A large crowd at Jamestown Community College jeered the champions but the tag champs taunted the crowd and emerged as winners! Fans in the crowd claim the Dark Menace illegally used his cane to batter an opponent outside the ring but the Menace denies it saying, “The lighting in the gym is weird, they saw an optical illusion. We don’t cheat. Luscious and Black Sheep are law enforcement guys.”

Game fans can expect playing cards for Criminal Justice and more later this year in a special game pack called Dark Menace Forces. This will be the ultimate “invasion” team for any fed game fans are playing as the 6-Pack will include 4 men, 1 woman, and of course a certain dark manager!