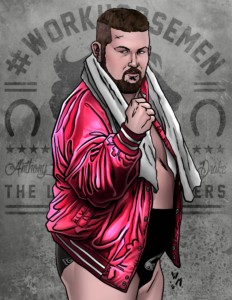 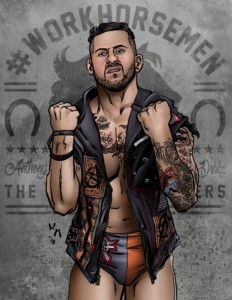 The EVOLVE tag team division was shaken up in the summer of 2017, when the duo of Anthony Henry and James Drake came together and shocked the EVOLVE tag team champions Catch Point and won the title in their first match tagging together.  Henry and Drake each made their names in the southeastern US independent scene primarily in singles matches.  However, since their big EVOLVE tag team title win in their home region of North Carolina, this duo has started competing regularly both in EVOLVE and in other promotions and is continuing to improve their work as a team.

The Workhorsemen, as they dubbed themselves, went on to have a few successful tag title defenses in the summer of 2017 before losing the titles to another unlikely duo of Ethan Page and ACH.  They earned another shot at the title in December against Catch Point, who reclaimed the titles, but that match ended in a no-contest.  Will they look to challenge for the title again, or focus more on singles competition and look to achieve the success in EVOLVE that both have had in singles competition outside the promotion?  It will be up to you to decide what paths Henry and Drake take in your promotion!

Anthony Henry and James Drake will join Matt Riddle, DJZ, Austin Theory, Dominic Garrini, and 2 other wrestlers in EVOLVE 5.  The game will be released at the WWN Live Experience in New Orleans in April and will mail out to Filsinger Games fans worldwide soon thereafter. Preorder for this set begins Monday April 2nd!