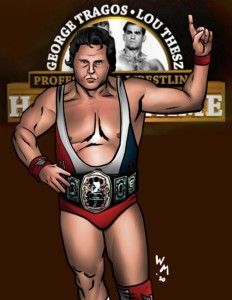 Bob Roop is the third confirmed participant for the George Tragos/Lou Thesz Professional Wrestling Hall of Fame Set. Roop is a former NCAA champion, who went on to represent the U.S. in the 1968 Olympics as the heavyweight in Greco-Roman wrestling. Following the Olympics, Roop turned pro and had a long career. He competed in many Southern territories and held many championships, both in singles and tags. Along the way he battled other stars like Harley Race, Ted DiBiase, Jack Brisco, The Masked Superstar, and others. Will Roop renew these battles in your fed?

The Tragos/Thesz Hall of Fame Set will spotlight wrestlers in the physical hall of fame in Waterloo, IA. Bob Roop joins Jack Brisco and Dan Severn in the lineup announced so far.  Look for more names to be announced in the upcoming weeks for this 10-card set, with a September release scheduled!