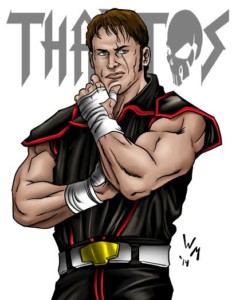 The key villain at COTG Live Event was none other than the Evil Gamesmaster himself: Thantos.  He was portrayed masterfully by independent wrestling standout Chuck Taylor on July 11 in  Jamestown NY.  Thantos was once an ally of GWF founder Omega, and tag team partner of the heroic Star Warrior, but he turned his back on both when he broke the Galactic Code and formed the Villain team.  Now he is set to unleash his MASTERLOCK finisher on all of the Galactic Heroes!

The COTG Live Event game edition will be available in early October.  However, you can watch the event for yourself on MP4 download or on Video on Demand starting later this week from smartmarkvideo.com. It’s the most unique wrestling event of the year!