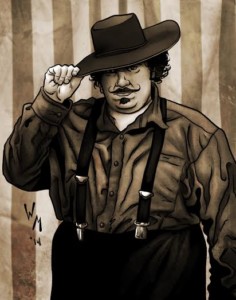 The next competitor set for the Olde Wrestling Extravaganza pack is a big one.  Literally!  It’s the meanest bully this side of the Mississippi, “Big” Sue Jackson.  Jackson really likes to throw his weight around, always starting fights with the crowd and wrestlers much smaller than himself.  His overpowering move set includes the runaway Steamroller and the front-falling powerbomb he dubs the CLOSE SHAVE.  Who will step up to confront this mustachioed malcontent?

The Olde Wrestling Extravaganza expansion set will feature 4 playing cards with all artwork colored in sepia tone to emulate vintage pictures.  This unique game edition will be available at their second Annual “Extravaganza of Wrestling Exhibitions” on September 28th in Norwalk, OH. It will ship out to game fans in early October so keep watching for info on how to pre-order!