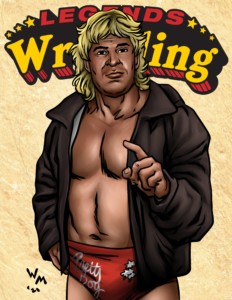 With a 4 decade career that spanned the globe and nearly any territory you can think of, “Pretty Boy” Doug Somers’ notable runs in the Tri-State and Texas territories helped put him on the map. A stint in the Pacific Northwest followed where Somers challenged for tag team gold and the heavyweight title held by future partner “Playboy” Buddy Rose. It wasn’t long after Somers’ time in Oregon and Washington that Somers found himself back in his home territory of Minneapolis. It was there that he truly made his mark in one of the top tag teams in the territory – holding the tag team gold for 255 days with Buddy Rose – and was embroiled in a feud with two of the hottest young stars on the scene, one of which would go on to global fame as a future hall of famer. Somers’ career continued all the way into the 2000s with work on the indie circuit, where he continued to collect championships and wins until his retirement in 2011.

“Pretty Boy” Doug Somers comes to your fed with the release of the Legends of Wrestling 4-pack this Fall! Will he reunite with his tag team partner, “Playboy” Buddy Rose? Or do you have other plans in store? It’s up to you, promoter! Preorders for Legends 2021 Special Edition 4-pack, Indies Deathmatch 2021, and FUTURE SHOCK 2117 will start on September 10.