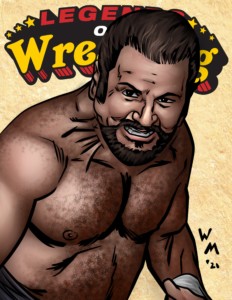 One of the top talents of the Pacific Northwest makes his way into color! Dutch Savage is a 7-time Heavyweight Champion and 12-time Tag Team Champion in the territory and was named Wrestler of the Year in 1974 and a part of the Tag Team of the Year on 4 separate occasions with multiple partners, including Jimmy Snuka. He and Snuka even held the tag titles for 11 straight months at one point in their legendary teaming. Savage also had memorable runs in the Midwest and Vancouver, working with names like The Destroyer and Mad Dog Vachon. Towards the end of his run in the Pacific Northwest, Savage feuded with set-mate Buddy Rose and the Sheepherders while occasionally teaming with Roddy Piper. A fearsome competitor in and out of the ring, Savage had little trouble resorting to underhanded tactics or brawling with the best of them, and is known for innovating the Coal Miner’s Glove match and his dreaded thumb to the throat.

A true icon of the territory, Dutch Savage, is a fitting addition to the Legends 2021 Special Edition 4-pack. The 4-pack, Indies Deathmatch 2021, the Nick Gage Special Edition card, and FUTURE SHOCK 2117 are now available for pre-order HERE.