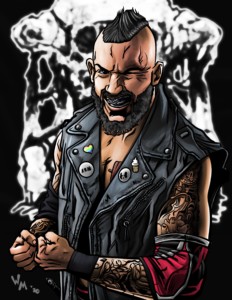 Kicking off the 2nd quarter of Promoter Prime is a highly requested Indie wrestling game card for Erick Stevens!  Stevens’s original Filsinger Game card debuted in 2009 as part of the Legends of the Future series, but this is his first color game card.  Stevens had his original run on the indies in the 2000’s, winning the Wrestling Observer Rookie of the Year in 2007 and culminating his career at the time in Ring of Honor in 2010.  Then after nearly a decade away he returned to the indies in 2019 to see the excitement of the indie movement of today first hand.  He was set to retire again in April in his hometown of Tampa, but due to the unexpected cancellation of shows this spring Erick announced his career would continue after the shutdown to end things the right way.  In the mean time Filsinger Games fans will get to play out all the match ups we missed out on the past month and all the other indie dream matches we hope to still see.

Promoter Prime Q2 2020 will mail with our May game releases at the end of May.  You can subscribe to Promoter Prime (Indies, Legends and COTG) any time and receive all cards released up to that point in the year and future cards on a once a quarter basis.  Tabletop and Online options are available HERE.