The MODfather of Professional Wrestling Debuts for Filsinger Games 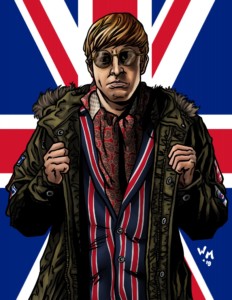 Hailing from a town called Malice is one of the most unique wrestlers in the UK, who is taking the British scene and perhaps soon the worldwide scene by storm. He is Flash Morgan Webster.  Webster is truly a man from another time and place in his look and demeanor.  Don’t let the sharp dressing fool you, he is a man who can fight with the best of them.  However given the choice he would rather wow crowds with Flashy moves.  When it comes to putting on an incredible show, In Mod We Trust.

Flash Morgan Webster joins Zack Sabre Jr. as part of the 8-card Best of the Indies: United Kingdom game pack.  The set will debut on July 14 at GalactiCon in Pittsburgh, and begin mailing worldwide soon soon thereafter. Be ready for the British Invasion and the MODfather!