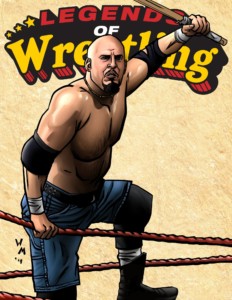 The next wrestler in Legends Expansion is another Hardcore Icon, the incomparable Justin Credible.  Credible rose to prominence during the hardcore movement of the 1990’s and captured a World Championship during this time.  Credible is an accomplished singles wrestler, but may be best known for his teamwork in a number of successful tag teams.  He is often seen bringing his trusty Singapore cane to ringside with him, which often finds its way into his matches.  What will happen when you book Justin Credible against fellow Singapore cane carrying wrestler The Sandman and recreate their violent and bloody feud?

Justin Credible joins Shane Douglas, Sandman, Al Snow and Ox Baker in the 10 card Legends Expansion Set 4.  This game edition and Special Edition cards for Francine and Bill Alfonso will debut July 13th at GalactiCon in the Philadelphia area!  The game will begin mailing to customers by July 22nd.  These games and the latest Champions of the Galaxy game edition GWF Sudden Death 2135 are available to preorder right now!