The Raging Bull Joins the Roster of Legends Expansion VI! 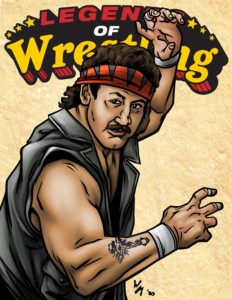 “The Raging Bull” Manny Fernandez will hit your promotion in Legends Expansion VI!  Fernandez began his career in the Southwest United Status, and worked his way through the Midwest, Southern, and Mid-Atlantic.  Fernandez formed an exciting tag team with his friend “Boogie Woogie Man” Jimmy Valiant, before turning his back on Valiant in a violent feud.  Will they be friends or resume their feud?  Fernandez also feuded with Tully Blanchard, Don Muraco, Ivan Koloff, and the Rock n’ Roll Express.  What role will Fernandez play in your fed?  Only you can make that decision!
Manny Fernandez will join an awesome Legends Expansion VI roster of 80s era stars that includes The Barbarian, The Warlord, Adrian Adonis, Bob Orton, Don Muraco, Davey Boy Smith and Dynamite Kid as well as announcer and interviewer Gordon Solie. Special Edition cards for Mr. Fuji, Captain Lou Albano, and Jimmy Hart are also available.  The set will be available in December and preorders have begun!  Go to the Filsinger Games Shop to place your order NOW!
By Tom|2020-11-30T11:38:41-04:00November 30th, 2020|Legends of Wrestling|Comments Off on The Raging Bull Joins the Roster of Legends Expansion VI!