Mark Haskins is Hellbent on Dominating the UK Scene 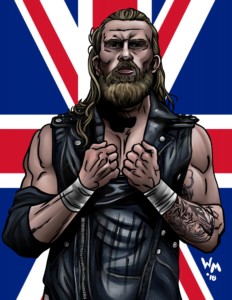 The 7th name in the UK set is another man who has won multiple championships, not only in his native UK but on other continents as well!  Mark Haskins is a talented wrestler, with a combination of agility, striking and submissions that makes him a formidable foe for any challenger.  The other thing that sets “The Star Attraction” apart is his vicious mean streak towards his opponents that demonstrates his desire to win and show his superiority.  It’s this attitude that has gotten him to the top and most certainly keep him there.

Mark Haskins joins Zack Sabre Jr., Mark Andrews, Tyler bate, Trent Seven, Travis Banks and Flash Morgan Webster as part of the 8-card Best of UK Wrestling game pack.  The set will debut on July 14 at GalactiCon in Pittsburgh, and begin mailing worldwide soon soon thereafter. Get ready to add the best of the UK scene in your indie promotion!  Order this set and our other summer releases HERE.