Bodyguard Mr. Hughes is Here to Protect the Legends! 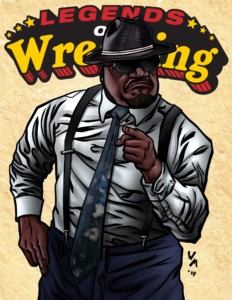 When it comes to intimidating bodyguards, there are few that compare to Mr. Hughes.  Hughes has wrestled in all the major US promotions in the 90’s and was the protector for many Legends including Harley race and Shane Douglas.    Later in his career he moved on to train many top independent wrestling stars, including AR Fox.  Who will enlist the services of Mr. Hughes in your fed?  Or will you have him recruit some of his trainees and start his own group?

Mr. Hughes joins The James Gang and Disco Inferno in Legends Expansion Pack V! Keep watching for more names in this exciting set as we lead up to preorders on November 29th!