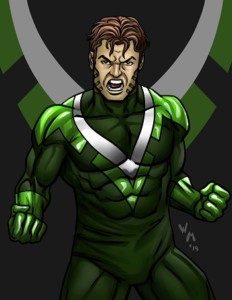 The last teaser for this set is the tag team partner of Centauri…Nebula!  What is his story and connection to Centauri?  Find out later this week when FUTURE SHOCK:  Centra Wrestling Federation 2115 is released to the universe.

FUTURE SHOCK:  Centra Wrestling Federation 2115 is a 14-card set including LANCE AT-LAS, MISTER CENTRA, SABOTEUR, ORACLE, DOOMSAYER, TOTAL ANARCHY, REVOLVER, EVOLUTION, CENTAURI, NEBULA and AGONY.  In order to play this game edition, you will need nine other previously released cards, which can be ordered separately in the Future Shock Bonus Pack for people who do not own the 2129-2131 GWF game editions.  Both the new game edition and the Bonus Pack can be ordered HERE.