The Bruiserweight Completes the Best of the UK Set! 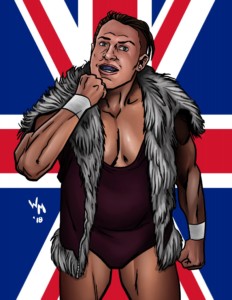 Completing the incredible Best of the UK set is perhaps the biggest name on the United Kingdom wrestling scene today, “The Bruiserweight” Pete Dunne.  Dunne is known for his brutal wrestling style and sour attitude that earned him the Bruiserweight nickname. An extremely accomplished wrestler, he has won titles throughout the UK as both a singles and tag team wrestler.  But in the past year he has finally achieved world-wide acclaim under the banner of the largest wrestling promotion in the world, and now everyone can appreciate the talent that Pete Dunne possesses.  Game fans will be eager to match up Dunne with Trent Seven and Tyler Bate both as partners and opponents and recreate some of the epic encounters they have had in recent times.

Pete Dunne joins Zack Sabre Jr., Mark Andrews, Tyler Bate, Trent Seven, Travis Banks, Mark Haskins, and Flash Morgan Webster as part of the 8-card Best of UK Wrestling game pack.  The set will debut on July 14th at GalactiCon in Pittsburgh, and begin mailing worldwide July 20th. Get ready to add the best of the UK scene in your indie promotion!  Order this set and our other summer releases HERE.