The Best of the Indies Tag Team Set is Getting Ready for a Revolt! 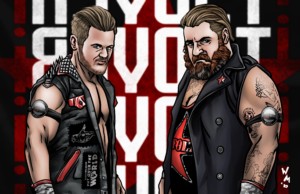 Best of the Indies Tag Teams 2020 will feature 5 of the top regular tag teams on the Indie scene today.  The final team in this set is Revolt!, Caleb Konley and Zane Riley. This is the first Filsinger Games playing card for Riley, while Konley was first part of the EVOLVE starter set released in 2014.

Fans of tag team wrestling in the Southeast US know one of the best kept secrets in indie wrestling, and that is the tag team Revolt!  Konley and Riley are veterans with a decade plus experience each, and have been teaming in the Carolinas for the past 5 years.  They started to pop up more throughout the country in the past year before the indie shutdown earlier this year.  While much of their recent publicity has been over their tag team name, its this tandem’s ability that should really have people talking.  Konley is an accomplished high flyer and technical wrestler, which is complimented by Riley’s size and strength.  Expect to see more of this impressive duo as the indie scene continues to make its comeback.

Best of the Indies Tag Teams 2020 will include Revolt!, Bear Country, Besties in the World, Aussie Open and the Wildcards.  The set is now available for preorder HERE and will begin shipping with our other September releases on September 30th!