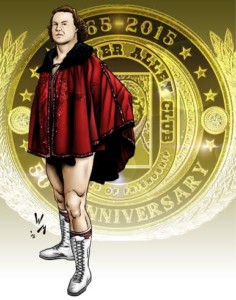 Ron Hutchison, winner of the inaugural CAC Trainer’s Award in 2014, will join the Legends roster as a wrestler in the upcoming CAC Reunion pack! Hutchison wrestled in the United States and Canada and at one time was Canadian Heavyweight Champion, prior to his second career as a wrestling trainer  . He has competed against LWF greats like the Iron Sheik, Greg Valentine, and King Kong Bundy. He has also trained many wrestlers including the LWF’s own, Sinn Bodhi.

Hutchison is an active member of the Cauliflower Alley Club and will be in attendance at the 50th Anniversary Reunion coming on April 13-15 in Las Vegas. Come to the convention and have Ron (and the rest) autograph his new playing card! Tom Filsinger will also be on hand to release the CAC Reunion pack and honor the CAC for 50 years of service.

The CAC Reunion pack (and the new Evolve 2 pack) will begin mailing to loyal promoters during the week of the CAC Reunion! Watch for pre-order information, coming soon!