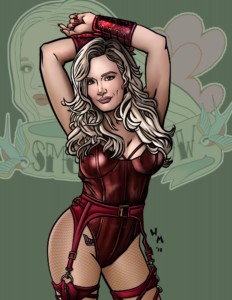 The fourth women in the Women of the Indies 2019 expansion is the beautiful Scarlett Bordeaux.  The Chicago native started her wrestling career as a valet and ring announcer, often performing in Ring of Honor.  In recent years she has focused more on wrestling and has had some success on both the indies and on National TV.  Recently the Smokeshow has gone back to the indies full time and also begun working often in Mexico, where she recently won mixed tag team gold with Sammy Guevara.  This “Perfect Ten” is sure to continue to turn heads, both in and out of the ring.