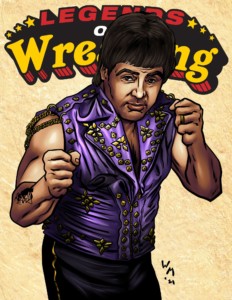 Professional wrestling in Memphis is home to some iconic names – there is little doubt. One such icon looms large over the history of the territory in contrast to his smaller stature – “Superstar” Bill Dundee. Born William Cruickshanks in Angus, Scotland, Dundee was raised in Melbourne, Australia and joined the circus at the age of 16 becoming a trapeze artist. By the time he was 19, Dundee had transitioned to professional wrestling and plied his trade for a decade before arriving in the US in 1974. He soon made his way to Memphis and began growing a legend perhaps eclipsed by only one other local talent. Dundee teamed and feuded with fellow Legend Jimmy Valiant and new set-mate Austin Idol. Claiming over 40 title reigns with 13 different regional championships, it’s no wonder that Dundee’s name is still held in such high regard by locals. But Dundee’s career carried him beyond Memphis as well. His work behind the scenes, as a manager, and capturing titles in other territories is more than worthy of note as is the fact that he remained an in-ring competitor into his mid-70s – defeating Indie wrestling standout Tony Deppen at the age of 75.

The Superstar can be at your disposal, Promoter, when the Legends of Wrestling Expansion VIII arrives this December. Pre-orders will begin on Black Friday November 26th along with the Women of the Indies 2021, FTR 3, and the brand new Ringside Companion.