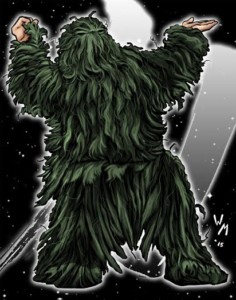 Up until 2015, the Swamp Monster had only a few appearances in Chikara. However, Chuck Taylor drafted him as the final member of the Gentleman’s Club team for Challenge of the Immortals. That is a decision that Taylor seems to have regretted, as he blames the Swamp Monster for all of his team’s failures and treats him like garbage (which Swamp Monster does smell like). Despite the threats of Chuck Taylor, Swamp Monster is always a team player and a favorite of the Chikarmy.

The Swamp Monster is ready to shimmy his way into your Chikara fed as part of the Chikara Immortals 8-pack. Pre-order the game this weekend, and get ready to have slimy fun when the game ships in December!