The Baltic Seige is Set to Protect Chikara in New Game Pack! 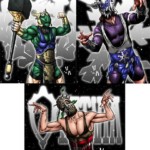 The latest trio to join the Chikara game is the eccentric group from the Baltic States of Eastern Europe, The Estonian Thunderfrog, the Latvian Proud Oak and the Lithuanian Snow Troll, better known as the Baltic Seige!

This group first came into prominence in the Wrestling Is promotions and the fun-loving band of foreigners quickly made a lasting bond with the Chikarmy.  Although they only had one match in Chikara before it closed, they were eager to help Icarus in his fight to bring back the beloved promotion, and are happy to help protect it from the forces of evil set to destroy Chikara.

The Estonian Thunderfrog was the first member of the trio to make himself known, and is the defacto leader of the group.  The Thunderfrog carries with him his hammer of peace, which only he has the power to carry and one blow to the ring with it will send his opponents flying.  He loves being in America, especially with all the lovely “princesses” all around the arenas he visits.

The Latvian Proud Oak is a tree-like creature, who is not only slow and plodding in the ring, but is also quite slow at making his exit from the ringside area, always looking to thank each of his fans personally.  He might seem not too bright, but the Proud Oak is a tricky one who an surprise his opponents at any turn.

The Lithuanian Snow Troll is the least experienced and smallest of the trio, but equally as loved as his partners.  The Snow Troll complements the Thunderfrog and Proud Oak and pulls off some incredible trios maneuvers.  Now that Chikara has returned they hope to utilize these moves at the next King of Trios!

The Baltic Seige are part of the Ashes of Chikara pack, which along with the Chikara Wrecking Crew pack, are being released at Chikara’s re-debut event, You Only Live Twice May 25th in Easton, PA.  Games will begin mailing to all customers the following week. Watch for info on how to pre-order these awesome new packs!