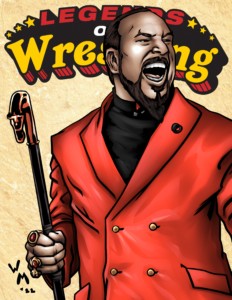 James Mitchell brings his managerial talents to Legends of Wrestling as a part of Promoter Prime! Mitchell began his career wrestling the Carolinas before transitioning to a role he seemed born for in the Smoky Mountain territory. Mitchell took his talents to every major national promotion of the 90s and beyond. Always marching to the beat of his own drum, his evil persona has scene him pull the strings for a diverse roster of talent that all began with the recently announced Prince Kharis and has also included Mikey Whipwreck and Su Yung.

The Sinister Minister can be a part of your legends roster when you order your Promoter Prime subscription today!