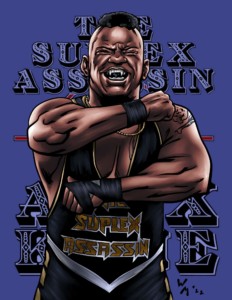 A collegiate wrestler and submission specialist, Alex Kane is bringing his crushing arsenal of suplexes to your indie fed, promoter! Kane trains hard to punish his opponents in the ring and give them a one-way ticket to suplex island. Kane’s impressive strength and explosive power are nearly unmatched – possessing an impressive 500lb deadlift without a weight belt. Speaking, of belts, Kane is the current holder of a prestigious title in a national promotion – a title he won in a 5-way ladder match that included fellow Filsinger Games indie talents ACH and Myron Reed.

Kane is a fantastic addition to the indies game line and can be yours when the Best of the Indies 2022 drops in late May!