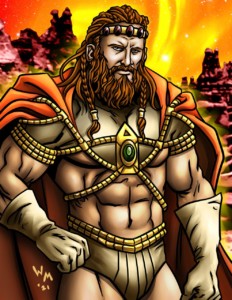 Hailing from the planet Rigel, the quiet but proud Lance At-Las has lived on Mars for over a thousand years. He spent that time communing with nature, honing his mind and body, and venturing to Earth, where his peak physical condition was on full display. A loner by nature, Solaris has convinced At-Las to join the Supreme Gods to even the odds against Doomsayer’s Galactic Rebels.

Will his impressive power and the Martian Man-Handler be enough to stop Comrade Terror? See for yourself, promoter, when GWF Wargames 2091 – Reimagined arrives in March!