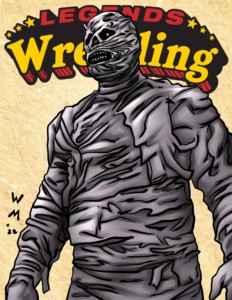 Straight from the sarcophagus and hailing from Temple of the Sun, Egypt, Prince Kharis is coming to your fed, promoters! Controlled by a magical scroll, “it’s up to you promoter” who will be the one to call the shots for the 3500 year old mummy. Standing at nearly 7-feet tall, this undead monster could be an unstoppable opponent for your territory’s competition.