Here’s What’s Great About Being a Wrestling Manager 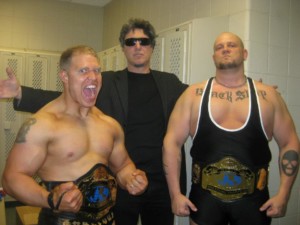 Especially a heel manager. It lets you vent your dark side, your total arrogance and vanity.

It also allows youd to manage incredible talents like Black Sheep Benett Cole, Rocky Reynolds, Laura Phoenix, “Lone Wolf” Rex Havoc, and “The Morning Star” Michael Kai Rayne. These guys (and lady) work hard every night and bring passion to their craft, as do their many brothers and sisters on the indie circuit. They are the backbone of the wrestling business and a big part of the reason I love owning a wrestling game company.

Then there’s the Dark Menace…

My career as a wrestling manager began in 2006 in Detroit, Michigan. Filsinger Games was promoting at the Motor City Comic Con and an indie show was scheduled right there in the main hall. One of the wrestlers on the card was a big fan of my games, Steve Rutkowski. His current wrestling name is Rex Havoc and at the time he was wrestling for the tag belts with Michael Kai Rayne. Steve’s wife Laura Phoenix was their manager.

Steve asked me if I wanted to be a co-manager and I loved the idea. I had recently released my book, “The Dark Menace of the Universe” and somehow by osmosis I became the Dark Menace.

This gave me a persona I could use as a wrestling manager. I put on dark sunglasses, a suit, someone handed me a cane for a prop, and presto, the Dark Menace was born! The Dark Menace is arrogant, narcissistic, and feels he is better than everyone around him. He cheats then denies it and argues with the crowd. He also loves to taunt children (Chuck Taylor, you’ve got company!). 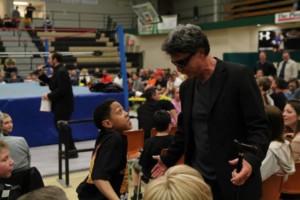 This brat kid should be home and in bed.

The event in Michigan gave me a taste of what it felt like to be a wrestling manager and I loved it. Kids hated me and threw paper wads at me and I knew I must be doing something right.

Funny thing is I had absolutely no training in how to be a wrestling manager. On an indie card last year another manager critiqued me in the locker room for not doing some stuff by the book. “You’re not supposed to walk to the other side of the ring during tag matches, it’s unrealistic. The opponents would attack you.”

Speaking of arrogance, this guy was the real deal! He spewed all kinds of unwanted advice to act important. He reminded me of Nurse Ratched in “One Flew Over the Cuckoo’s Nest.” I think he was just jealous that the Dark Menace got more heat from the crowd than he did.

The Dark Menace isn’t an over-the-top yeller, screamer, one of those managers that overacts all the time. The Dark Menace is cool, calm, self-confident, but incredibly selfish and arrogant. That’s what makes him so hate-able, he totally believes in himself.

I had a sensational streak where I was only managing wrestlers with belts or wrestlers that would win a belt the night I managed them. Thus I dubbed myself the “Manager of Champions.”

I have managed the Black Sheep Bennet Cole a few times, he’s a sensational “big man” wrestler in the northeast. We were sitting around in the adjacent room of a YMCA gym (a makeshift locker room) killing time before our match. Out of nowhere it came up that I was the creator of Champions of the Galaxy and his eyes lit up. Turns out he was a fan of my games! This has happened a few times with wrestlers and I always enjoy it. 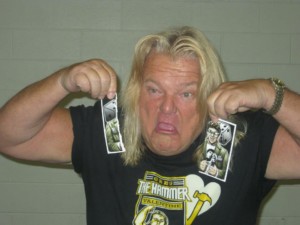 Greg Valentine rips up my game card and mocks the Dark Menace, setting up a feud.

In the last few years I’ve had ongoing feuds with Brutus Beefcake and Greg Valentine. Promoters have said to me, “Somebody needs to get his hair cut by Brutus Beefcake and your wrestlers are bald, so it’s gotta be you!” Sorry, no way. I’d say, “I like Brutus Beefcake but I’m not letting him near my head with those shears!” Besides, why kill the mystique of the Dark Menace like that?

So I “hired” flunkies to accompany me to ringside along with my wrestlers. These flunkies always had nice, flowing long hair, a great temptation for Mr. Beefcake. Somehow my flunkies always wound up at the wrong place at the wrong time and got their hair cut off by Beefcake, to the delight of the crowd. Oh well, no skin off my nose, or hair off my head. The Dark Menace doesn’t care. If you don’t fill your role for me, goodbye, don’t let the door hit you on the way out. That’s the way the Dark Menace feels about his underlings.

Adults that attend indie events can be kind of jaded and cynical, it’s not always easy to get them loud and involved. My approach is to get their kids involved. When I’ve got the mic I always make it a point to tell the stupid parents to take better care of their kids. “All the brats in attendance should sit in their chairs and shut up,” I tell them. “It’s past your bedtime anyway.” Man, this always works. The kids go nuts!

One time before a show I was sitting at a Filsinger Games table selling games and signing autographs but not dressed yet as the Dark Menace. A ten-year old boy came to the table and was looking at all the stuff including Dark Menace game cards. He looked at me and said, “Is that you?” I said yes, I’m the Dark Menace. He didn’t believe me. I said wait a minute. I walked over to the box behind my table and put on my black suit jacket. I put on my dark sunglasses and grabbed my cane. Then I turned around abruptly and faced him. He was terrified and ran away!

If I’m out in public, say at Wal-Mart, and wrestling fans come up to me and says they saw me live at a show, I’m not friendly to them. If they only know me as the Dark Menace then I stay in character. I guess I’m old school that way.

Now that I’ve moved from New York to Arizona it’s time to bring the infamous Dark Menace, “Manager of Champions” to an indie promotion in the southwest. When that happens I’ll report the news!

And don’t forget that the Dark Menace challenges all wrestlers in all promotions! Get Dark Menace Forces, a game pack featuring wrestlers I’ve managed. We’re taking over! Go here to order! 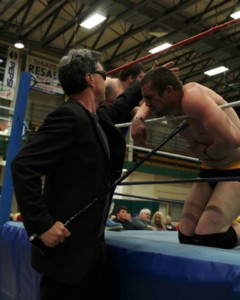 The Dark Menace helps an opponent on the ropes.