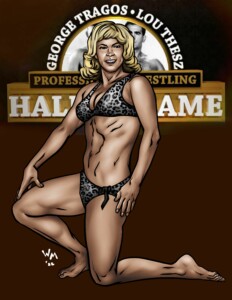 Legendary woman wrestler Penny Banner is the final announced name for the Tragos/Thesz Hall of Fame Set 3. A tag team wrestling and women’s world champion, Banner is one of the most recognizable names in women’s wrestling history and a member of multiple halls of fame. Her notoriety is not restricted to the squared circle, though, as she gained some measure of fame for dating Elvis Presley I’m the late 50s! A true legend in every sense of the word, Banner is more than deserving of her place in this set.