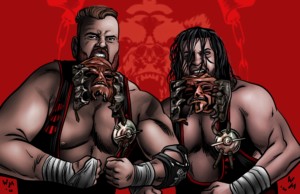 Best of the Indies Tag Teams 2020 will feature 5 of the top regular tag teams on the Indie scene today.  The 3rd team to join the set is a pair of wrestlers each getting their first Filsinger Games cards, Bear Bronson and Bear Boulder, collectively known as Bear Country!

Bear Country have been tagging together for a few years in the Northeast US, but really gained in popularity in 2019 through the Beyond Wrestling Uncharted Territory series.  In Beyond they have taken over the mantle as the aces of the tag team division and have taken on all comers, including a wild Fans Bring the Weapons encounter against Team Tremendous to close out 2019.  Bear Bronson and Bear Boulder had begun to branch out more throughout the Indie scene, gaining a rabid fan following for being a big man tag team that could really perform in the ring.  Will you match up Bear Country with another pair of hosses in your fed or perhaps match them in a clash of styles against one of the better high flying duos on the indie scene?

Best of the Indies Tag Teams 2020 will include Bear Country, Besties in the World, Aussie Open and 2 other top indie tag teams.  Preorder for this set and all our September releases starts next Monday September 7th.  Be on the lookout each Wednesday through the release in late September for more additions to this set and for the tag wrestlers in Indies Prime this quarter.