Enough is Enough! Rule Breakers Must be Punished! 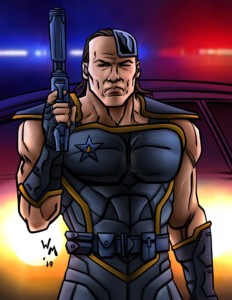 The gloves are off! In 2088 the villain team introduced Bishop Hell to the GWF. In 2089 they’ve announced the arrival of the Mad Jester! And now Omega and the FDF has seen enough! The GALACTIC PUNISHER is a no nonsense galactic cop from Cetus, and he’s ready to hand down the VERDICT and LIFE SENTENCE to rule breaking bad guys!