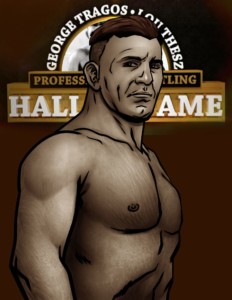 One of the namesakes of this set, George Tragos, is the fourth confirmed participant for the George Tragos/Lou Thesz Pro Wrestling Hall of Fame set! Tragos was a great amateur wrestler in his home country of Greece, competing on two separate Olympic teams in Greco-Roman wrestling. He moved to the United States in the late 1920s and started as a college wrestling coach before turning pro. He wrestled many of the top stars of the era, including Nick Bockwinkel’s father. His greatest contribution to wrestling was introducing a young Lou Thesz to the sport and training the future World Champion. Tragos’ finisher, the ARMLOCK & SCISSORS, is such a grueling hold that one opponent had to have his arm amputated after submitting to the move! Who will feel the wrath of this move in your legends fed?

The Tragos/Thesz Hall of Fame Set will spotlight wrestlers in the physical hall of fame in Waterloo, IA. George Tragos joins Jack Brisco, Bob Roop and Dan Severn in the lineup announced so far.  Look for more names to be announced in the upcoming weeks for this 10-card set, with a September release scheduled!