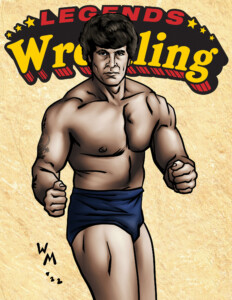 Tony Garea was a 5-time tag team champion in the Northeast, including a months-long run with fellow legend Larry Zbyszko. A tag-team specialist to his core, Garea spent nearly the entire decade of the 70s at the top of the tag team ranks wherever he went. His multiple tag-title reigns also included one with Pat Patterson in San Francisco. He squared off against teams like the Valiants, the Moondogs, and Mr. Fuji & Mr. Saito – trading the titles with the two former teams, while the latter team ended his final run as a tag champion. Garea would go on to team briefly with Eddie Gilbert and B. Brian Blair before he transitioned into singles action and found himself on the losing end to a number of rising newcomers. After over 15 years in the Northeast’s spotlight, Garea moved to a behind-the-scenes position, though he could often be seen on-screen breaking up brawls and trying to restore order.

Obviously, a legendary figure in tag-team wrestling, Tony Garea is the latest announcement for the Legends of Wrestling Expansion X!  Tony Garea joins Pat Patterson, Eric the Red, Mr. Fuji and Mr. Saito in the 12 card Legends Expansion set X, which will be available for preorder on Black Friday November 25 and will ship this December.