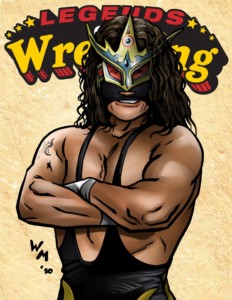 Continuing the theme of Mexican Legends with an influence on US wrestling, come one of the most influential cruiwerweights in the 1990’s, Juventud Guerrera!  Guerrera is a 2nd generation wrestler, who got his break in the US in 1996 alongside some of the other top luchadors at the time.  The high-flying style was a new concept for the US audience and Juvi became very popular to one of the biggest wrestling audiences of all time, and won multiple major cruiserweight championships in the late 90’s and early 2000’s.  Juventud Guerrera is sure to enhance any promoter’s cruiserweight division!