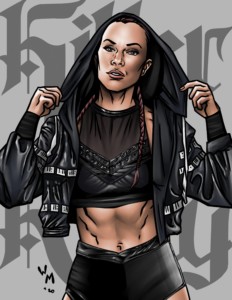 Bringing more international flavor to the ring, Killer Kelly is a brutal, no nonsense competitor that just wants to beat her opponent down to the mat. Hailing from Portugal, Kelly has wrestled around the world in Europe, Japan, and the United States.  Kelly has been seen on television for the biggest wrestling company out there, including competing in a major woman’s singles tournament with competitors from around the globe.  Now primarily wrestling in the US, she can be seen wrestling all the biggest names on the indie wrestling scene.

Killer Kelly joins Ivelisse, Leyla Hirsch, Kylie Rae and 4 other women in the Women of the Indies 2020 game edition.  The set will be available in December and will begin preorders on Friday November 27th.  Stay tuned each Wednesday for more previews of who will be in this amazing game edition.