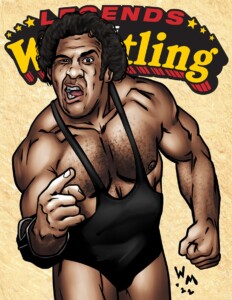 Angelo Mosca was a football standout for Notre Dame and in the CFL before transitioning to professional wrestling in the late 50s. Drafted by the Philadelphia Eagles, Mosca had already chosen to play for the Hamilton Tiger-Cats. A 5-time All-Star, Mosca would split his time between the ring and the field until retiring from the CFL in 1972. Mosca simultaneously worked across North America for various territories – earning a spot on top of the card nearly everywhere he went. With more than ten different singles championships from Toronto to the Bahamas, Mosca was always a force to be reckoned with. In Canada, Mosca was nearly always a brawling good guy with tons of fan support. Still, many promoters will likely remember him as the brutal bad guy in the Northeast territory in the early 80s, challenging for Bob Backlund’s vaunted world championship. Mosca would wind down his career toward the end of 1984 with only a handful of matches before hanging them up for good in 1986. A true legend of professional wrestling, Mosca passed last November at the age of 84.

Filsinger Games is privileged to add Angelo “King Kong” Mosca to the Legends of Wrestler color line in Expansion X coming this December!  Filsinger Games’ holiday releases are now available for preorder.  This includes the much anticipated Legends Expansion Set X, along with Special Edition cards for King Kong Bundy, Arnold Skaaland and Eric Young.  To order any of the holiday releases visit the New Releases page of the website.