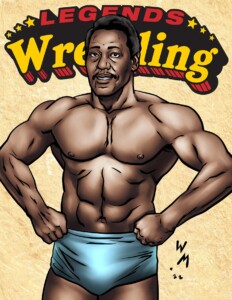 S.D. Jones was a lot more than 9-second fodder for King Kong Bundy. Beginning his career in the early-70s, Jones worked the Northeast territory for the bulk of his career but was not without his time in other areas, including the Mid-Atlantic and west coast. Jones would tangle with fellow mid-card talent like Johnny Rodz and teaming with other stars to make a run at teams like Fuji & Saito and John Studd and his assorted partners. Jones also took part in a memorable angle with Greg Valentine, helping to establish the dastardly heel after falling prey to the devastating figure-four leglock. Stretchered out of the ring, Jones would return to Madison Square Garden in a cast. A fixture of the New York territory for over a decade, Jones carved out an unlikely legacy in the hearts and minds of fans and takes his place as a member of the Legends of Wrestling Expansion X in living color.

Filsinger Games’ holiday releases are now available for preorder. This includes the much anticipated Legends Expansion Set X and Special Edition cards for King Kong Bundy, Arnold Skaaland, and Eric Young. To order any of the holiday releases, visit the New Releases page of the website.