The Birdman is Set to Fly in Legends Expansion VI 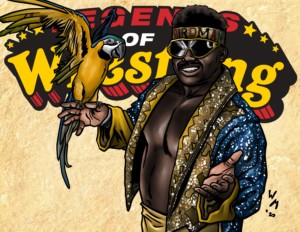 This holiday season marks the release of the 6th color expansion set to the Legends of Wrestling game.  And there are few wrestlers more colorful than the Birdman himself, Koko B Ware!  In the late 80’s Koko would come to the ring with his bird Frankie, flapping his own arms like a bird while dancing before and after his bouts.  He wore brightly colored wrestling and colorful sunglasses, all of which helped his unique appearance and his appeal.  Ware would even sing at times, further endearing him to his fans.  Oh and Ware could wrestle too.  He competed against and defeated several big-name stars of the day, to including Nikolai Volkoff and Harley Race.  Ware was honored for his career with his induction into one of wrestling’s most prominent Hall of Fame’s.  It was a fitting honor, for a truly unique and fun wrestler.

Koko B Ware joins The Barbarian and The Warlord in Legends Expansion VI.  The set will be available in December and will begin preorders on Friday November 27th.  Stay tuned each Friday for additional Legends that will be joining this game edition.