The Women of the Indies 2020 Game Edition is Now Legit! 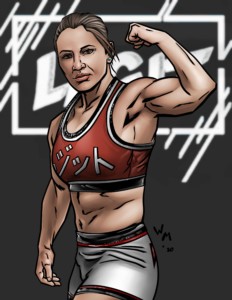 This December is the release of the 2nd Women of the Indies game edition, which will feature 8 game cards all featuring wrestlers getting their first Filsinger Games playing card.  The 2nd wrestler that is part of the set is “Legit” Leyla Hirsch.  Leyla got her start at the CZW wrestling academy, and came to be a prominent name on the US Indie scene the past 2 years in CZW and Beyond Wrestling.  Now her star has begun to shine even brighter as part of the top Joshi promotion in Japan.  Her combination of great mat skills with powerful suplexes, knee strikes, and a moonsault have made Hirsch tough to beat.  Now that she has started getting some exposure on National television, there is no telling the heights that Leyla Hirsch will reach in women’s wrestling.

Leyla Hirsch joins Kylie Rae and 6 other women in the Women of the Indies 2020 game edition.  The set will be available in December and will begin preorders on Friday November 27th.  Stay tuned each Wednesday for more previews of who will be in this amazing game edition.