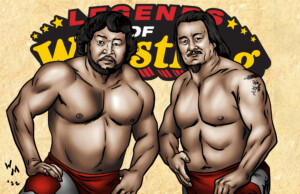 Two-time tag team champions, Mr. Fuji and Mr. Saito had enjoyed long successful careers even prior to their pairing as a team in the Northeast. Fuji began wrestling in 1962 in his native Hawaii before moving on to the Pacific Northwest and then the major promotion of the Northeast for a main event run as a tag champion. He also saw success in the Carolinas, Georgia, Texas, and California among others. In the early 80s, Fuji returned to the Northeast where he teamed with Mr. Saito for another tag team main event run against the top teams in the territory. Mr. Saito was a Japanese-born wrestler. Technically sound and hard-hitting, Saito, too, saw success wherever he went. He held titles in San Francisco, Florida, Minneapolis, and Vancouver to name a few. Battling legends like Jack Brisco and Antonio Inoki in singles action as well as holding tag gold with Ivan Koloff. His pairing with Mr. Fuji in the 80s led to even more success as they reigned at or near the top of the division for two years.

Mr. Fuji and Mr. Saito have more than earned their presence in the Legends of Wrestling card game and it’s a privilege to honor their partnership in the Legends of Wrestling Expansion X. Mr. Fuji and Mr. Saito join Pat Patterson and Eric the Red in the 12 card Legends Expansion set X, which will be available for preorder on Black Friday November 25 and will ship this December.