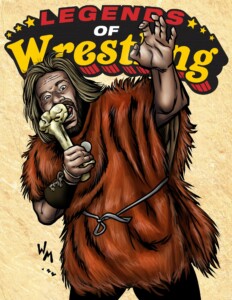 Born Ib Solvang Hansen, Eric the Red was one of the major stars of the Northeast. Eric emigrated to Canada in the 50s and fell in love with the professional wrestling scene. He made his debut in Toronto in 1968 and, within a year, became a significant draw, turning heel to face the world heavyweight champion in a series of matches. Eric also appeared in New York as a challenger to their world champion and even scored a major tag team win over their champion in 1974. Regularly appearing in Cleveland and Buffalo, Eric was a main event star wherever he went and headlined against world champion Jack Brisco in 1973. Eric the Red squared off against such distinguished opponents as Johnny Valentine, Bobo Brazil, Ivan Koloff, and Gorilla Monsoon – can you imagine the ring-shaking battles these 300+ pounders had?

In addition to his time in the Northeast, Eric also traveled the world – seeing action in Japan against the legendary Antonio Inoki. Eric also captured titles in Puerto Rico and wrestled in Texas and Louisiana before landing in Florida for a stint with a legendary promotion. Eric held tag team gold there and wrestled against names like the Spoiler, Steve Keirn, and Mike Graham. Sadly, tragedy struck when Eric was hit by a car after phoning for assistance for his own stalled vehicle. In only 10 years, Eric the Red put together a legendary career, and we are honored to have him join the ranks of the Legends of Wrestling.