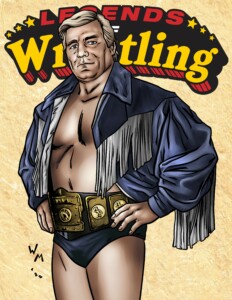 Pat Patterson’s career began in Quebec in 1958 and saw him travel through Boston, MA, and Portland, OR before arriving in San Francisco, CA, where Patterson’s true legend took formation. A top draw in the region for over a decade, Patterson teamed with Ray Stevens as the Blonde Bombers before a turn saw Stevens and Patterson embroiled in a lengthy bloody feud. Patterson also spent time in Japan feuding with the legendary Antonio Inoki. Patterson eventually wound up in the Minneapolis territory teaming once again with Stevens for a time. In 1979, he began a run with the biggest company in the land that lasted for over 40 years. An innovator, champion, and icon, Pat Patterson was a proud legend that takes his rightful place among the pantheon of Filsinger Games Legends of Wrestling talents.