People often ask me who is my favorite wrestler of all time and this question throws me for a loop. I don’t have a single answer.

I have experienced five distinct wrestling eras in my lifetime. Each one had its own personality and great wrestlers. I’ll go over each one:

This was my first exposure to wrestling as a child and it got the ball rolling. I lived in Cleveland, which had its own wrestling promotion (NWF) which was okay, but a cable station also broadcast the Detroit shows and it was better. This was a promotion owned and run by the original Sheik, a fact I would learn later and which surprised me since the Sheik was portrayed as a violent, unhinged, out-of-control sadist.

Wrestling has had a fascinating evolution in its audience. This was the Believer Era. The vast majority, around 80% or more of people that watched and attended the events, thought it was real. That changed the whole vibe. People didn’t judge the matches for “performance” value but instead cheered for their favorites the way a rabid fan cheers for their favorite football team. The match could have been slow, boring, convoluted, but what mattered is the good guy won.

Just as important was cheering AGAINST the heels. Everyone wanted them to be punished for their misdeeds and huge egos. There were great heels in this era including the Sheik.

My grandparents watched these shows and went nuts! They believed everything. I remember my grandfather screaming at the TV screen at the referees for not seeing foreign objects or other forms of cheating. My grandmother made sounds of pity when wrestlers looked like they were hurt.

My favorite wrestlers in Detroit were the Sheik, Bobo Brazil, and Johnny Valentine. What’s impressive to me is throughout his life and after decades of depicting himself as a total wild man, the Sheik was never interviewed and never showed his off-camera self. The mystique never died. We never saw him talk about a “high spot” or even speak a coherent sentence. Now, that’s living the role! 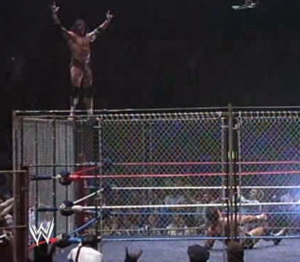 I took a hiatus from wrestling for several years while I attended college and graduate school in search of a “normal” career. These were still the days of territories and regional wrestling, but things were changing due to cable television. The wrestling programs from the WWF were starting to be broadcast around the country. I was hooked.

I started watching the WWF prior to the arrival of Hulk Hogan and this was the last gasp for wrestling as it was when the wrestlers portrayed their characters in a much more realistic way. Matches with World Champion Bob Backlund would be unwatchable by today’s standards with the emphasis on “wear down” holds and slowing the pace. But for its time it worked great.

These were the years that Vince McMahon was a straight announcer and my favorite wrestlers were Jimmy Snuka and Don Muraco. Wrestling history has not been kind to Muraco. He was the last great WWF heel prior to the Hulk Hogan era. His greatness as a wrestler on the mic has been forgotten by many, but I thought he was great and the Snuka vs. Muraco feud ended in spectacular fashion in Madison Square Garden with Muraco retaining his Intercontinental Belt despite being crushed by Snuka after the Superfly Leap off the top of the cage. Wrestling fans remember this great moment but often forget that Muraco won the match.

I was thrilled that wrestling became so popular, but I wasn’t a fan of the change of style that took place during the Hulk Hogan years. The product became more directed towards children and gimmicks reigned supreme. A guy like Don Muraco couldn’t survive. Hogan’s matches became unrealistic and predictable. But who was I to judge? The product took off and became a sensation. I’m sure if I was a child or teenager during this time I’d have loved it.

And there was a lot about the WWF to like. Macho Man Randy Savage became one of my favorites and there was always a collective buzz about what was going on. Wrestling shows became more streamlined and sleeker than before. Wrestlers became pop culture super heroes.

It was in this environment that I created Champions of the Galaxy and launched Filsinger Games, so a tip of the hat to Vince McMahon and the WWF!

It was also during this time that I wrote for wrestling magazines but I didn’t use my real name for fear  they would kick me out of my job as a college professor!  I used the name Adam Blast, one of the characters in Champions of the Galaxy. When I asked an editor what to do about wrestler quotes for my articles he said: “Make em up.”

WCW caught my interest and even though I didn’t think they were as consistently entertaining as the WWF, they had the Road Warriors, and they became my favorite wrestlers of this era. Hawk and Animal were awesome and I watched regularly to see who’d be pitted against them. One time they had King Kong Bundy (before his WWF days) in a tag match against Hawk and Animal and all I could do was be amazed at the intensity and power in the ring.

I must add how happy and proud I am to have most of the wrestlers mentioned above and more in my Legends of Wrestling Card Game. This ride I’ve been on has been fantastic. 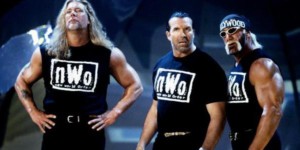 I took another hiatus from wrestling in the early 1990s and focused on my new life: raising a family and moving to Jamestown, New York. But wrestling grabbed me again in the late 90s when the nWo made their debut for WCW. I thought this was incredible and the unpredictability of the shows made it even better. I liked Hogan more as Hollywood Hogan than the yellow and red Hogan. His portrayal as a heel was amazing. I also liked Scott Hall and Kevin Nash.

The build-up leading up to the big match, Sting vs Hulk Hogan, was masterful. But then they blew it. The match itself had an unsatisfying ending with an awkward attempt to make Brett Hart part of the match. So even though Sting won, it was anticlimactic.

Against stiff competition WWE roared back on all cylinders and they also entered a classic era. My young family and I watched shows every Monday night. It was an era of incredible spectacle with the Rock, Undertaker, Stone Cold Steve Austin, Vince McMahon, and Mankind raising the bar every week. Crowds were very enthusiastic and even though they sometimes pushed the boundaries of good taste too far, it was overall a great product.

It was during this era of great popularity for wrestling that Filsinger Games began to really take off.

I love the variety of wrestling that’s available today from the WWE to all the great indie promotions. I’m thrilled that my company has licensing agreements with many of these including Ring of Honor, Chikara, Combat Zone Wrestling, Evolve, Championship Wrestling from Hollywood, Shimmer Ladies Wrestling, Olde Wrestling (I hope I haven’t left anyone out!). This reminds me of the territories from the past and I enjoy it.

I’ve attended several independent shows in the last ten years and I love them all. The fans are very smart and the appreciation of wrestling has completed its cycle from the Believer Era to the Entertainment Era (and the muddled grey era in between).

A great memory for me was attending an independent show in Los Angeles and seeing El Generico win a ladder match against Kevin Steen. I also attended some great Chikara shows as part of promoting our Chikara games.

As far as popular wrestling goes, I enjoy the wrestlers that come through the indie ranks like Daniel Bryan and C.M. Punk. They are great wrestlers that truly connect with the fans.

One way or another wrestling through all these eras has been great. What other form of scripted live entertainment besides traditional theater has lasted so long? The characters are over-the-top and tap into our deepest wishes and fears, to say nothing of being a cathartic experience. I’m privileged to have met many of these wrestlers as friends and business partners and wouldn’t change it for anything. I’ve got some pretty wild stories and maybe someday, when it’s safe, I’ll share them!

So there it is, some of my favorite wrestling memories over the years. I look forward to more ahead!