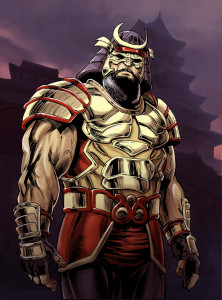 Tharkas and PSI are in for a BIG surprise in ORIGINS 2137!

Giant Azuma is back and he is dropping “giant” from his name, but that doesn’t mean he’s any less of a giant!

In fact Azuma is leaner and meaner than before and he’s set to go on a rampage in the GWF whether it’s singles or tag action!

Can the Conquerors, Saber included, survive the wrath of the new look Azuma?

Time will tell when ORIGINS 2137 is released in July!