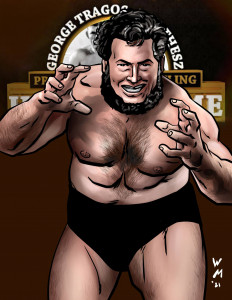 Robert James “Gino” Marella was born June 4, 1937. An amateur wrestling standout, Marella placed second in the 1959 NCAA Wrestling Championships and made his professional debut at the age of 20, billed at 6’7” and nearly 350 pounds. Within 6 years, he had transitioned to the terrible Gorilla Monsoon character – hailing from Manchuria, eating raw meat, and speaking no English. This character propelled him into the spotlight and a feud with the biggest star of the 60s and early 70s at Madison Square Garden. Monsoon would have a hall of fame career that saw him battle the best of the best, both as a good guy and a hated heel. He’s shared the squared circle with a diverse set of names including, Nikolai Volkoff, Butcher Vachon, Ray Stevens, Bobo Brazil, Larry Zbyszko, and Killer Kowalski. Monsoon was honored with induction into the Tragos-Thesz Hall of Fame in 2011.

Add Gorilla Monsoon to your fed this July when the George Tragos-Lou Thesz Professional Wrestling Hall of Fame Game Edition 2021 drops. Pre-order will be available in late June!