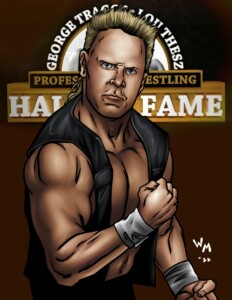 Dan Spivey had a career that spanned major territories and promotions in the US throughout the 80s and 90s, as well as a memorable stint in one of the biggest companies in Japan. He began his career in Florida under the tutelage of one of the most entertaining wrestlers to lace up a pair of boots. He wrestled in tag team action for the majority of his early years in Florida and North Carolina before making a move to New York, where he teamed with set-mate Mike Rotunda and feuded with the dream team of Valentine and Beefcake. After a less than memorable run as the Golden Boy, Spivey found more success returning to the Carolinas in tag team and singles action. His run Crockett and then Turner was undoubtedly more lasting as he remained in the promotion for nearly five years before departing. During this time, Spivey also saw success in Japan – capturing the tag team titles of one fabled promotion with partner Stan Hansen. Eventually, Spivey found himself in New York again in what might’ve been a forgettable turn had his former partner’s son not taken the reigns years later and turned the inspiration into something wholly its own. Injuries forced Spivey to retire from the ring in 1995, but clearly, his influence did not stop there.

“Dangerous” Dan Spivey is the latest name announced for inclusion in the Tragos/Thesz Hall of Fame Set 3 soon!