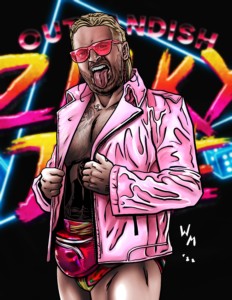 Prepare to get “Outlandish”, promoters! Zicky Dice is joining the Best of the Indies 2022 expansion set! One of the most unique personalities on the indie scene has made a name for himself with national exposure from multiple promotions and garnered the attention of fellow Filsinger Games alum Brian Myers and squared off with names like Matt Cardona, Jonah Rock, and Ricky Starks. His career began under the tutelage of Tyler Black at the Black and Brave Academy, and he’s spent the last 6 years crisscrossing the country, making a name for himself.

Zicky Dice joins announced names like Rohit Raju and Jack Cartwheel in the Best of the Indies 2022 expansion, dropping later this month. Preorders will begin Friday the 13th!