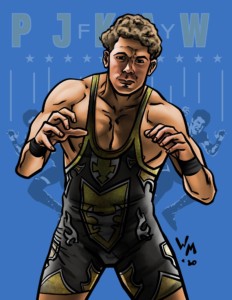 As part of the Q2 Indies Prime releases comes a 2nd generation wrestler out of the Louisiana area, PJ Hawx!  PJ is the son of long time indie veteran Luke Hawx and team together as a formidable tag team known as Hawx Aerie.  “The Prodigy” was an accomplished amateur wrestler before joining the pro ranks.  He is known to utilize his amateur skills in the ring, but has also caught the eyes of fans with his death-defying leaps.  PJ Hawx achieved some level of notoriety this past February when a clip of him jumping off the 2nd story of a mall onto his opponents in the ring went viral. Promoters will be quick to team up PJ and his father Luke Hawx (found in the Tier 1 Wrestling pack).  Will they be a contender in your team rankings?

Promoter Prime Q2 2020 will mail with our May game releases at the end of May.  You can subscribe to Promoter Prime (Indies, Legends and COTG) any time and receive all cards released up to that point in the year and future cards on a once a quarter basis.  Tabletop and Online options are available HERE.