The Brightest Star In The Sky 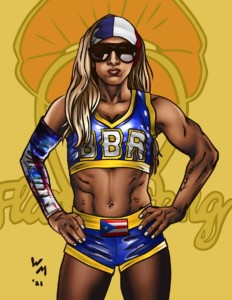 The Boricua Badass is a colorful star who knows her worth and then some. Tasha Steelz’ unmatched energy and speed have given her the advantage inside a squared circle on numerous occasions. Whether tagging with former partner Kiera Hogan in a title-winning combo or joining Karen Q and sometimes Deonna Purrazzo for some trios action, Steelz has proven her ability to navigate the tag team division of multiple promotions. But her tag success almost belies her incredible runs as a singles star. She put together a great run in ROH, culminating in a title shot against Kelly Klein, and recently made it to the finals of a tournament for a major televised promotion but came up short against Mercedes Martinez. Steelz has also shared the ring with Kylie Rae, Thunder Rosa, and Holidead. Regardless of who she’s facing or where she’s working, the Garden State Goddess wants one thing: to be the Brightest Star in the Sky – and the Sky’s certainly the limit for Tasha Steelz.

Tasha Steelz is part of Indies Prime 2021 in Q4, which will ship with the holiday releases in mid-December.  The 2021 Filsinger Games Holiday Releases are now available for Preorder! You can order all of the newest game items right now HERE. You won’t want to miss the Women of the Indies – International Edition, FTR: Screwjob, Legends of Wrestling Expansion VIII, or the Lance Russell Special Edition Card. Get your order in today!