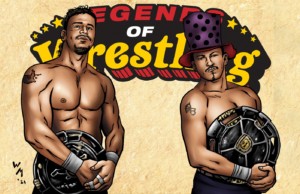 The rapping duo of J.C. Ice and Wolfie D was the most dominant tag team in the waning days of the Memphis territory. When J.C. Ice turned on his father, Bill Dundee, and joined forces with Wolfie D, PG-13 was born. Their street-style wrestling abilities combined with speed and finesse led them to wear the tag team titles a total of 16 times – more than anyone other teams during the 90s, and it’s not even close. The rule-breaking, over-the-top antics of the tandem earned them the crowd’s ire. They had little trouble utilizing their prized hubcaps to spark feuds, beat down opponents, and win matches. After losing a Loser Leaves Town Match, the team returned under masks as Fire and Ice, the Cyberpunks. Once reinstated, the masks came off, and the team would actually begin to get the cheers and adoration of the fans with their ridiculous ring gear, slick style, and winning ways. Not content to only pursue tag accolades, both men also held the Memphis version of the middleweight and television titles, and Wolfie D would even go on to hold the heavyweight championship of the promotion for a time – besting territorial star Brian Christopher. After the Memphis territory began to wind down, Ice and Wolfie made their way to the Northeast and found the television spotlight on Monday nights for a brief time. They would then move down the road to Philadelphia for an extreme turn before winding things down themselves in the other big Monday night promotion. The tandem even spent time in Puerto Rico and Japan. Whether showered with boos or boosted by cheers, PG-13 indeed was the last of the great Memphis tag teams and is more than deserving of their spot in Legends Prime.